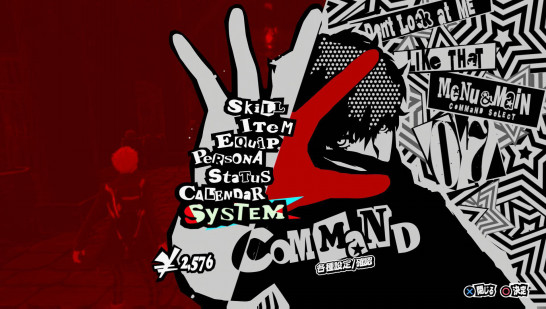 Yeah, so I’ve been playing a lot. Don’t look at me like that!

I was expecting Persona 5 to have a lot of new words. I was both more and less prepared than I thought.

If you don’t know what Persona is, and you like JRPGs, my first recommendation is to try and get a copy of Persona 4. It ain’t easy, actually, getting your hands on Persona these days. 1 and 2 are PlayStation 1 games, and 3 and 4 are PlayStation 2 games, though both have been released on other platforms since. 3 being a PSP title and 4 a Vita title. The original 1 and 2 are quite different from 3 and 4, but still good, from what I hear.

Persona focuses on daily life for a high school student who finds themselves tied up in another world that rests in parallel to their normal one. While the main characters must help solve mysteries that tie the worlds together, they also need to attend class and study. The RPG battling and dungeon exploration is a pretty big part of the game, but no bigger or more important than the conversations you have with people around town as you build up relationships in a well-realized world.

You only have one year, so you’d best make it count!

The Persona games all take place on a year timeline, which means you’re living on a roughly 365 day schedule, and planning out how you’ll use that time is of the essence. Time only passes when you do an activity, so you have as long as you want to actually decide on what you’ll do with your time. I’m not one for timed games, but Persona does it right.

Persona 5, of course, is the next game in the series. In America and Europe, it comes out on April 4th. But, in Japan, it actually released last September, and I finally got it this past December. In Japanese, of course.

The Language of Persona 5

I’m sure when the game is released in America, there will be posts about the language of the game and how it expresses itself. Certain topics at the heart of Japanese culture, are brought up and splayed out. How do you confront people of authority? Who is responsible for students being bullied? What power do rumors hold?

But I’m being far more literal. The Japanese language is the language of Persona 5, and it doesn’t hold back.

Persona is in a category of games that treat themselves like literature at times. The result of which can be words  commonly written in hiragana like あなた written as the full Kanji 貴方 and はず written like 筈. Characters will use Kanji 95% of the time, which is fine with me.

It also uses a lot of older, odd words. Again, words I’ve been exposed to before. Whenever you make a new relationship, you get this message:

You have taken a new pledge.

A pledge that, in other words,

Is the way to escape this captivity.

I have received the blessed wind of the birth of the [some kind of] Persona,

To attain freedom and become a greater power.

And it’s pretty cool. But it doesn’t really matter that you fully understand.

Also, I should really translate you as “thou”, since 汝 has the old-timey sense of you. And if I were a localizer, there would be more words like “thy” and “art” and whatnot.

In fact, in Persona 3, when making a new pact it uses a pretty simple:

Thou shalt have our blessing when thou choosest to create a Persona of the [whatever] Arcana.

So yeah, they took that route officially too.

While Persona often has these flavorful ways of saying things, they also have daily life. And that means school teachers who use big words for their classes and friends who use slang that even modern day Japanese people might not be aware of. The kind of stuff you might find on the internet. A good example was a character using the term マジレス, which means a “serious response” (in response to something that was a joke), a term that originated on the 2chan message boards.

So while a teacher might explain something about Japanese with: 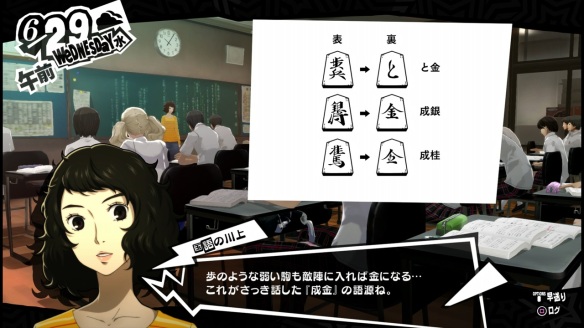 Your friends talk to you with all the casualness of real life. 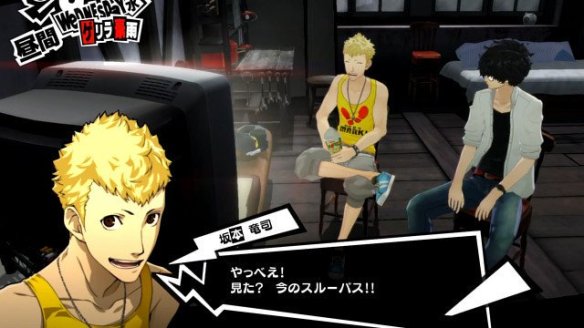 With a little anime flair thrown in there. Real people almost never use things like ぜ to end their sentences.

The end result is that you have a game which employs many different kind of speech patterns and words for each of those. Which is fine by me, as I’ve learned a lot so far.

So I’m about 15 hours in so far. One week of playing. And I have… 153 new words tagged in my dictionary app as having seen and not entirely understood while playing. That’s in stark contrast to 2 for Mario and Luigi: Dream Team, 10 for Yokai Watch, 17 for Final Fantasy XV, 68 for I am Setsuna, and 78 for Tokyo Mirage Sessions. Incidentally, Persona and Tokyo Mirage Sessions are both Shin Megami Tensei (真女神転生) games, which makes sense. The big difference is that I’m only 15 hours into Persona 5.

Why all these words? Well, with the focus on conversation, and the limited time to do everything, there’s a lot at stake. When a character talks to you, you want to respond as best you can. When a teacher quizzes you in class, correct answers mean stat increases. When you’re trying to acquire a new Persona in battle, talking to the enemy correctly can be the difference between success and failure.

Anyways, that’s enough for now. The point is, I’ve learned a lot, and it’s been a good experience. I’m excited to keep playing, but I always make sure to bring my dictionary with me.

I recommend the game, if you can get it and are at N2 or N1 level. No region locking means a Japanese version will work on your PS3 or 4.

And, as they always say on the loading screen:

3 thoughts on “New Words From Persona 5”